The Honda Pilot was developed by the Japanese company in the late 1980s and released in 1989. At the time it was the only UTV (utility terrain vehicle) in production by a major manufacturer.

The slew of features that had been baked into the Honda Pilot were impressive and it became an influential UTV within the still young genre. Honda only kept the model in production for two years and now they’re highly collectible.

The Honda Pilot was released in 1989 as the successor to the earlier Honda Odyssey line of off-road buggies, known as ATVs or UTVs depending on who you talk to.
The 1980s were a tumultuous time in the ATV world, constant accidents had led to the shutdown of three-wheel ATV sales and manufacturers were looking for the next big thing.
Honda had pioneered the original three-wheeler craze and they wasted no time in developing both four-wheel “quad” ATVs and buggy-like ATVs like the Honda Odyssey and Honda Pilot series.
The Honda Pilot is powered by a 400cc two-stroke engine, it has a fully automatic CVT with forward, neutral, and reverse, independent front and rear suspension, and a steering yoke that controls all driving functions (there are no pedals).

The ATV Is Dead – Long Live The ATV
By the mid-1980s the rising death and injury toll attributed to three-wheeled ATV had ensured that the very existence of the ATV may be in question. Ultimately the manufacturers would agree to cease production and shift their focus to safer types of all-terrain vehicles – like the quad bike.

Honda had been the key earlier pioneer of the three-wheeler and the largest manufacturer of them, so they stood to lose significant revenue following the demise of the market.

They had already developed a line of quads of course, but these were only somewhat safer than three-wheelers, and there were concerns that public sentiment may swing against them in the not too distant future.

With all of this in mind it was decided to develop what might have been the safest production ATV (or UTV) available for sale in the United States, if not the world – The Honda Pilot.

Safety would be such a paramount concern that the steering yoke was even fitted with two wrist tethers – so your hands would stay attached to it in the event of a roll over accident and not go flying out the sides where they could be crushed by the roll cage. 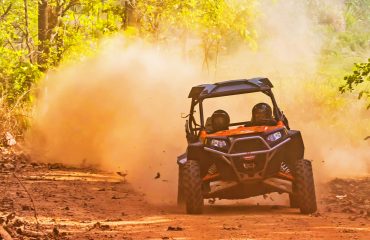 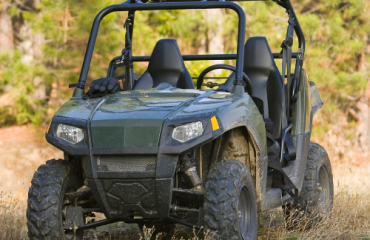